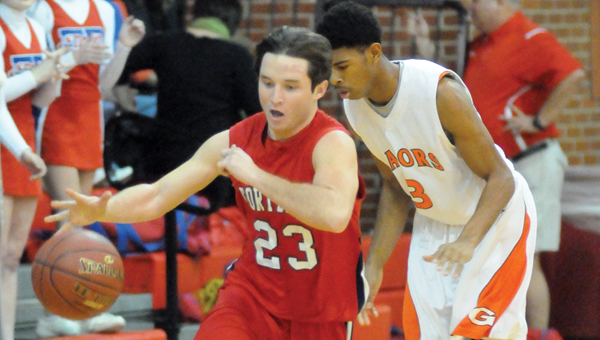 “The game was a lot closer than the final score indicates,” he said. “I thought we played really well. Most people consider Glenwood the best team in Class AAA, and we were able to slow the game down and get it in our tempo. We just had some crucial turnovers in the fourth that allowed them to get the lead.”

Fort Dale turned the ball over 23 times in the contest, while the Gators committed just 10 turnovers.

The Eagles’ turnovers late in the game helped Glenwood build a double-digit lead and forced Fort Dale to foul in order to extend the game.

“The turnovers that hurt the most were in the second half when we turned it over in our half-court set,” Mantooth said.

At the intermission, the Gators led by just three points, 28-25, thanks to a second period that saw Fort Dale outscore them 13-6 thanks in large part to a 7-0 run to open the period.

But the Eagles were unable to muster enough offense in the second half to overtake the Gators.

Chip Taylor led the Eagles with 23 points, while Taylor Windham scored 18. No other Eagle scored more than three points.

“They were able to matchup with us as far as size, so that made it difficult for us to get any scoring inside, and also Jack (Bates) was in foul trouble for mist of the game and that hurt us,” Mantooth said.

Bates fouled out of the game with 4:49 left to play. He scored just two points on 1-of-5 shooting and finished with eight rebounds.

Fort Dale finished its season with a 17-8 mark.