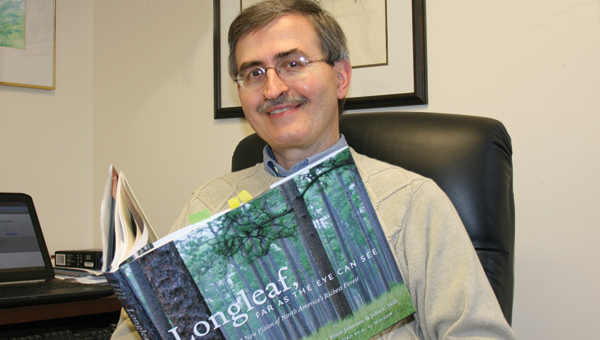 Dr. Steve Hubbard, English instructor at LBW Community College and Lower Alabama Arts Coalition board member, holds the book to be discussed during “A Storyteller in the House” on Feb. 21. (Submitted Photo)

LBW Community College (LBWCC) and the Lower Alabama Arts Coalition (LAAC) are jointly presenting “A Storyteller in the House” on Feb. 21.

This free public event features readings and discussions led by the authors of Longleaf, As Far As the Eye Can See, described as “a new vision of North America’s richest forest.”

Dr. Steve Hubbard, LBWCC English instructor, LAAC board member, and Storyteller coordinator, said the book is dedicated to restoring longleaf pine forests as an essential part of a healthy ecosystem.

“This is a book of natural history focusing on a tree that once was prevalent from Maryland, down through the Southeast, and on to East Texas,” he said. “Those who attend will hear interesting stories about the people who have lived around these magnificent trees, and about the trees themselves.”

Efforts are ongoing for the longleaf pine, which once covered 92 million acres. It has now dwindled to only 3 million acres due to logging, fire suppression, destruction by landowners, and a complex web of other factors.

“One of the aims of the book is to show that, though much has been lost, hope remains. A good deal of restoration is going on, and much more can be done.”

Authors of the book include Bill Finch, known to readers of the garden section of the Mobile newspaper; Rhett Johnson, former director of the Solon Dixon Forestry Education Center; and John Hall, curator of the Black Belt Museum in Livingston.  Photo illustrations are by Beth Maynor Young of Birmingham.

“Beth has made a name for herself in the photography world,” said Hubbard. “The pictures in the book are wonderful. She will discuss photographing nature.”

The event is scheduled for 7 p.m., Feb. 21 in the Andalusia City Hall Auditorium. Books and photographic prints will be available for sale. For more information call 334-881-2255.