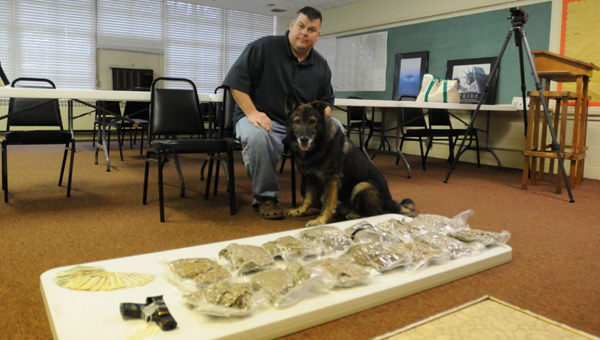 Travis Moss, 43, of Selma, and Terance Thomas, 32, of Selma, were initially stopped for speeding while traveling north on Hwy. 263.

“I stopped them because they were travelling well over the speed limit,” Parker said. “During the stop, I noticed a strong odor of marijuana coming from the car. Based on the smell, and my K-9 indicating on the car, I searched the car and found 14 bags of marijuana in a duffle bag in the trunk of the car.”

According to Lt. Justin Lovvorn, both Moss and Thomas will be charged with drug trafficking.

“That charge carries a higher punishment than a possession charge,” Lovvorn said.

Along with the drugs, Parker also recovered a 9mm handgun and $520 in cash.