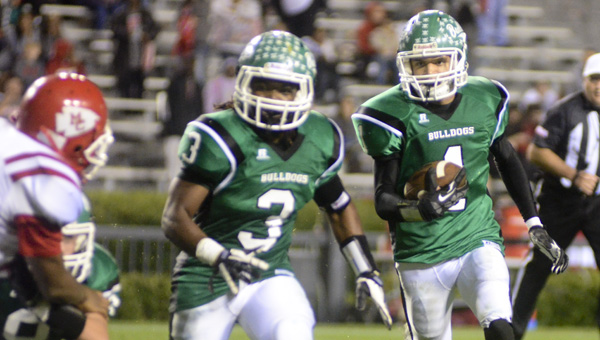 OJ Guice runs behind the block of Andrew Parker. Guice was named the MVP of the state title game.

In a season marked by shutouts, it’s fitting that Brantley’s defense put the exclamation point on the Bulldogs’ 33-0 win over Marion County to complete a perfect season and win a state title.

The game was already in hand, but the Red Raiders were threatening to break the shutout with a 43-yard drive.

However, Selleven Burnett scooped up a fumble at the Bulldogs’ own 21 and rumbled 79 yards for the touchdown.

“People were saying that we had a good defense, so we had to come out and show them,” said linebacker Adrian Howard, who led the team with 14 total tackles, 11 of those solo.

He also said it was important to the team to stop the Red Raiders on that final possession.

“We’ve been this far in the game, we ought not let them score,” Howard said. “It was very important to keep them off the board.”

Marion County came into the game averaging 50.0 points per game, but Brantley earned the shutout and held the Red Raiders to 136 yards rushing on the night. 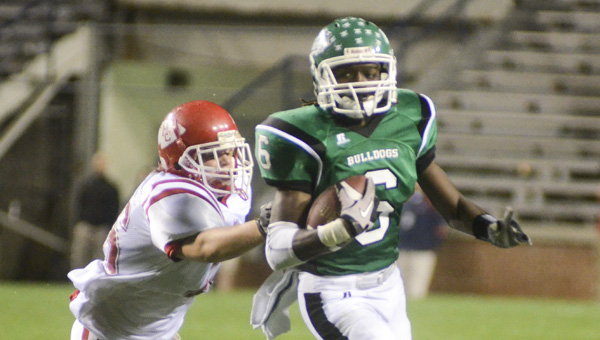 While the defense put on one of its best performances of the year, OJ Guice may have stolen the show.

Guice was named the MVP of the title game and had three touchdowns: a 15-yard catch, a 13-yard catch and a 21-yard run.

The Bulldogs set the tone early with Guice earning rushes of 26, 9 and 6 yards on the opening drive, which set up a play where he slipped out of the backfield and caught a 15-yard pass from Andrew Lowery for the game’s opening score.

“He’s been our leading receiver all year, and we found a go-to guy, a big play guy,” said head coach David Lowery. “He just used all his abilities today.”

Lowery said that they had put in a number of new plays specifically for the championship game, including the ones for Guice.

“We did have a couple of different plays we hadn’t shown all year, and I thought that really helped us out,” he said.

Parker stepped up for the Bulldogs and helped move the ball down the field for the Brantley’s second touchdown of the night.

Parker had 48 of the team’s 80 yards in a second-quarter drive that culminated in a 13-yard touchdown pass from Lowery to Guice, making the margin 12-0.

The defense continued to lock down Marion County, and the Red Raiders only had 61 yards of offense at halftime.

The third quarter was scoreless, but the Bulldogs exploded in the fourth quarter for 21 points.

Parker had a 5-yard touchdown run to make the score 19-0, and Terrence Bogen intercepted a Marion County pass to put the Bulldogs in position to score again.

Facing fourth and two from the Marion County 21, Brantley went back to the play that had been there all night, and Guice broke a 21-yard touchdown run off the left side.

The win wrapped up a perfect 15-0 season from the Brantley Bulldogs, and the school’s first title since 2009. 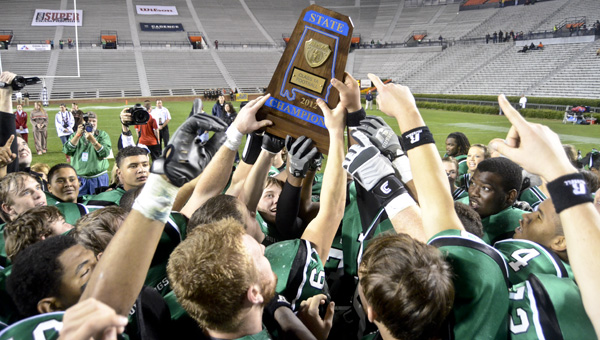 The Bulldogs celebrate with their state title trophy.