Tearing down the Great Wall 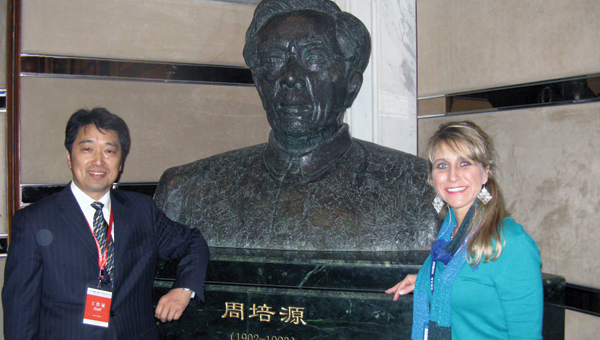 Butler County Schools Director of Curriculum Tera Simmons poses for a photo with Yu Xiaonan of Jiangus Provincial Department of Education during a recent trip to China. (Submitted Photo)

When Dr. Tera Simmons walked into the elementary school in the Jiangsu Province of China, she almost couldn’t believe her eyes.

The three-story building felt more like a museum than an elementary school.

“It was an exploratory school, so it was very similar to a science museum with a lot of hands on activities for the students to participate in,” Simmons said. “It reminded me of the McWane (Science) Center (in Birmingham). I was so impressed.”

Simmons, the director curriculum for the Butler County School system, had the opportunity to tour the school as part of the Chinese Bridge Delegation. She was one of 400 educators from the United States chosen to participate in the program, which is paid for by Hanban, a nonprofit organization funded by the Chinese government.

The goal of the program is to establish partnerships between schools in the United States and China.

“It was a great experience,” Simmons said. “I was really impressed by how much education is emphasized there. The students go to school six days a week and when they come home they do another three hours of homework and they also have homework on the weekends. There is a tremendous emphasis on education.”

While touring local elementary schools and high schools, Simmons had the opportunity to visit with students.

“That was neat,” she said. “It was amazing how well they spoke English, and I was impressed with their desire to learn. It was an awesome experience to be able to spend time in their schools and meet their students.”

Simmons is hoping her experience in Jiangsu will have an impact in Butler County.

“I talked to some people at the school about possibly starting a pen pal program where students here in Butler County and students in Jiangsu could write each other and learn about each other’s cultures. I think that would be a tremendous benefit to the students.”

Simmons said that it is important for students in Butler County schools to be exposed to other cultures.

“I really believe that cultural exchange is vital for students to succeed today,” she said. “If we are really going to prepare our students for the global economy we live in today, it’s important that we teach them about and expose them to as many different cultures as we can.”

“We are able to make it available to our students through video conferencing and on the computer,” Simmons said. “We have a certified teacher here in Alabama that teaches the class.”

“I’ve spoken to some teachers that have participated in the program and they had nothing but positive things to say about it,” she said.