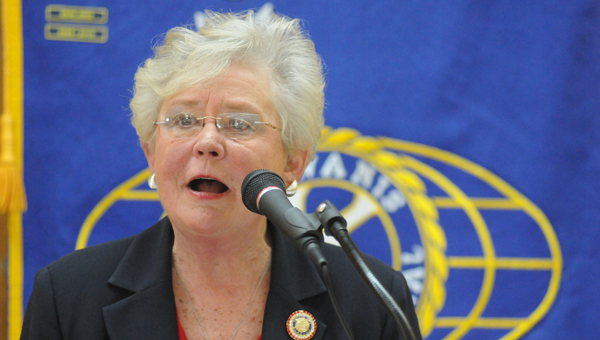 She understands that it’s often “back-breaking” work to make a farm succeed.

She also understands that things have changed since her days on the farm.

“This isn’t granddaddy’s farm, “ she said with a smile. “These days farms have all sorts of automated machines. Farmers study statistics and analyze numbers. A farmer has to be well-versed in a lot of fields to be successful today.”

And she said Alabama farmers, and farmers across the nation, are succeeding.

Today, one farmer is able to feed 155 people.

Ivey credits the increase in production to better equipment and increased knowledge and technology, but also credited programs like Farm-City Week, which was created in 1955.

Farm-City Week was established to bring about a better understanding between rural and urban people by increasing their knowledge and appreciation of each other as partners in progress. Farm-City Week is celebrated each year beginning on the Friday prior to Thanksgiving and ending on Thanksgiving Day.

“This year we’re celebrating 57 years of Farm-City Week, which is a way to bridge the gap between farm folks and city folks,” Ivey said. “It’s a good bridge and one that needs to continue.”

Ivey acknowledged the role of grocers, truckers, veterinarians and others in ensuring that the state and nation have an adequate food supply.

“There are a lot of folks that make this happen,” she said. “It’s a partnership between the farm folks and the city folks.”

This year’s theme for Farm-City Week is “Grown Safely. Extra Tasty.” The theme was chosen to help farmers counter some of the misinformation by showcasing the safety of our nation’s food supply and discussing how it impacts the security of our nation.