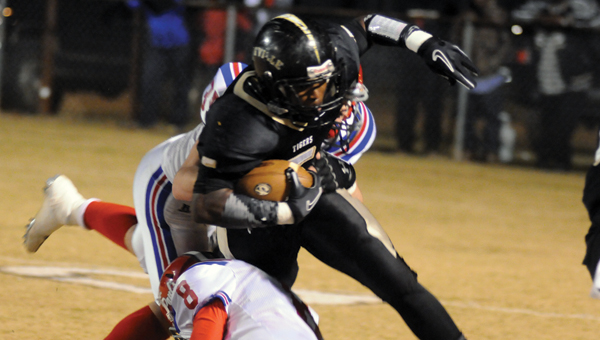 The magic ran out for Greenville High School Friday night.

A week after a last-second touchdown helped the Tigers stun No. 3 Homewood High School, No. 7 St. Paul’s Episcopal School handed Greenville a 38-12 loss at Tiger Stadium in the second round of the AHSAA Class 5A playoffs.

The loss ends the Tigers’ season with a mark of 6-6.

“I’m proud of this team,” Greenville High School head coach Earnest Hill said. “We just didn’t get to where we wanted to be.”

Friday’s loss marks the second time in the last two years that the Tigers have been bounced from the postseason in the second round of the playoffs.  In 2011, Vigor defeated the Tigers 48-17 at Tiger Stadium to end Greenville’s playoff run.

“Our guys have nothing to hold their heads down about,” Hill said. “We just got beat.”

The Saints (10-2) capitalized on a trio of Greenville miscues early to take a 17-0 lead and seize control of the game.

Greenville senior quarterback Kent Riley was intercepted on third-and-10 on the Tigers’ first drive of the game. The Saints turned that into a touchdown when senior running back Jordan Huff barreled his way into the end zone from 6 yards out.

The Saints’ defense forced a Greenville punt on the ensuing possession. Senior punter Ozell Carter’s kick from his own end zone went just 11 yards, setting up a short field for the Saints who turned that miscue into three points on the strength of a 25-yard field go by junior kicker Jannick Wildraut.

With 2:08 left in the first half, a 17-yard punt by Carter set up a 9-yard touchdown pass from senior quarterback Bradley Padgett to junior wide receiver Stephen Fleming to give the Saints a 17-0 lead at the intermission.

The Tigers finally got on the scoreboard with 3:18 left to play when Riley found the end zone from 16 yards out.

Riley added Greenville’s second touchdown with 1:40 to play on a 10-yard run.

Despite the loss, Hill praised the play of his seniors.

“Our seniors led the way all season,” the second-year head coach said. “They did exactly what I asked them to do, and I’m proud of them.”