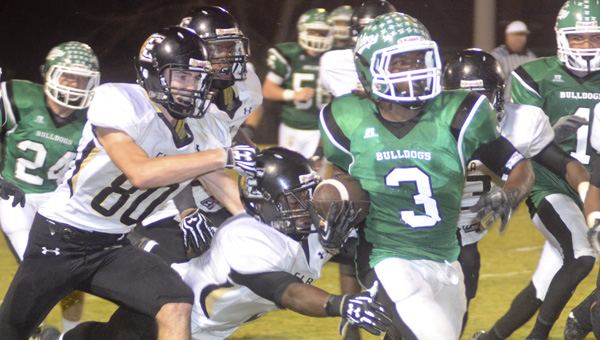 Brantley's Andrew Parker had 195 yards rushing and a touchdown as the Bulldogs defeated Elba 46-0.

Stout play from the defense paved the way for the Brantley Bulldogs’ 46-0 rout of Elba Friday night.

Elba came into the game averaging 39.6 points per game, while Brantley’s defense was only giving up 3.7 per game.

“Our defense played a really good game,” said head coach David Lowery. “They got some turnovers and made some things happen for us.”

Brantley wasted no time in making a statement, scoring on the opening drive with a run by quarterback Andrew Lowery.

On the next possession, Brantley’s defense first made its presence felt when Selleven Burnett recovered an Elba fumble for a touchdown and a 15-0 lead.

Elba threatened midway through the second quarter with a 70-yard drive that ate up more than five minutes off the clock, but despite penetrating inside the Brantley 10-yard line, the Bulldogs came up with a fourth-down stop.

A fumble gave Elba the ball back at Brantley’s 35-yard line with just over two minutes to play in the half, but Adrian Howard came up with a sack on fourth-and-20 to end the threat.

“I just stayed focused and tried to come up and make big plays whenever I could,” said Howard, who also ended an Elba drive with a fourth-down tackle in the second half. “I was just trying to help the team out.”

Brantley wasted no time in running the two-minute drill and moved the ball down the field with several runs by Lowery and a catch by O.J. Guice.

Zane Johnson caught a tipped ball at the one-yard line with three seconds left before halftime, but a false start penalty pushed the Bulldogs back.

As time expired in the first half, Ryan Harris hit a 23-yard field goal to give Brantley an 18-0 lead.

The Bulldogs came out firing in the second half.

A 48-yard run by Andrew Parker set up a six-yard touchdown run to make the score 25-0.

Despite a long pass to Terence Bogen and a 35-yard touchdown run by Ken’yada Teague, penalties kept points off the board for the Bulldogs.

The final onslaught came in the fourth quarter, as Brantley scored three touchdowns in less than two minutes.

A long run by Parker set up a 4-yard shovel pass touchdown to Guice, and on the next possession, Zeth Johnson intercepted a pass and returned it to the nine-yard line, which set up a touchdown pass from Lowery to Howard.

Stefan King picked up an Elba fumble on the next drive and returned it to the two-yard line, where Zeth Johnson punched it in several plays later.

Statistically, the younger Lowery was 13-19 passing for 137 yards and two touchdowns to go with nine rushes for 51 yards.

Parker had 195 yards rushing on 21 carries and a touchdown.

The game also marked the first time Elba had been shut out since 2006, and it was also the Tigers’ worst defeat since Brantley defeated them 49-0 that same year.

“We haven’t played four quarters — we played our kids four quarters, and that’s what we need to do,” Lowery said.

The Bulldogs play host to Fruitdale next week in the opening round of the playoffs.