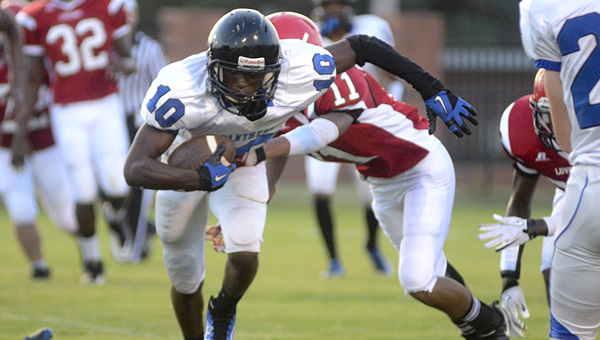 Turnovers proved to be a problem for the Georgiana Panthers as they had four giveaways in the first half on the way to a 43-13 loss to Luverne in jamboree action Friday night.

“With three interceptions and a fumble in a half, you can’t expect to be competitive,” said head coach David Watts. “Luverne’s a good team, and you can’t even play a bad team and turn the ball over four times in a half.”

Those turnovers started early, when Luverne’s Jamarcus June picked off a pass from Devin Bonner and returned it 25 yards for a touchdown.

After trading possessions, Luverne recovered a Georgiana fumble on the Panthers’ 36-yard-line and converted that into six more points.

While the Panther defense made a statement with a goal-line stand and recovered a Luverne fumble in the endzone for a touchback, the Luverne defense responded.

Allen Smith ran a swing route out of the backfield and June again picked off Bonner’s pass and raced 20 yards for a touchdown to make the score 18-0.

Down 30-0 late in the first half, the Panther offense mounted a last-minute drive.

A late hit penalty on Luverne put Georgiana on the Tigers’ 30-yard line with 1.6 seconds left in the second quarter, and Bonner connected with Justin Oikle for a touchdown pass as time expired to make the score 30-7 at halftime.

In the second half, it was the Panthers’ turn to capitalize on Luverne’s mistakes as Georgiana recovered a fumble on Luverne’s 12-yard line less than a minute into the third quarter.

Jacquez Payton took a carry to the left, but reversed field and outraced the Luverne defense for a touchdown run to cut the lead to 30-13.

Despite recovering two more Luverne fumbles, the Panthers were unable to get into the endzone again.

“I thought we had some good flashes in the first half and a few more in the second half,” Watts said. “We’re not blocking well, and we’ve obviously got to not turn the ball over.  But that’s why you play a practice game to start the season.”