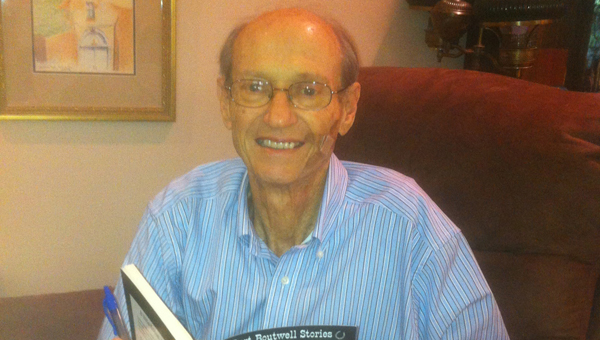 One local family’s story has transformed into black and white through the writing of one man.

Through a program called Boot Camp for Christian Writers, Horton has written a book about his own family with “A little fiction. A lot of fact.”

“The Burt Boutwell Stories is a collection of partially fictionalized accounts of the experiences in a real man’s life,” according the book’s description. “In these pages, you’ll find love, murder, faith, war, death, treacherous travel, wild animal attacks and any number of adventures therein.”

Denise George and Carolyn Tomlin both teach the Boot Camp program and said Horton started attending the Boot Camp about a year ago.

“Carolyn and I have been teaching writers how to write well and get published for the past four years,” George said. “Many of our ‘boot campers’ have become published authors.”

However, with the Horton’s health rapidly declining, George and Tomlin both made getting his book published a priority.

“Tom was one of our favorite ‘boot campers,’” George said. “He encouraged and inspired us with his wit and wisdom. We could plainly see he was very ill, but he came to all the Boot Camp Saturday seminars he could attend.”

Both George and Tomlin learned that it was Horton’s dream to publish his first book.

“We taught him through the seminars, kept up with him and helped him through phone calls and email, and put him with a woman that could help him format and self-publish his first book,” George said. “We felt the urgency of making Tom’s book a priority due to his rapidly declining health.”

The book was published in April with the cover designed by his granddaughter.

“Tom is a beloved member of our Boot Camp for Christian Writers and was so encouraging to everyone he met,” Tomlin said.

“It’s so that his memory goes on and is invested into the life of a writer that could otherwise not afford to attend,” George said. “I can’t tell you how happy we were that his dream came true and he was able to publish his first book.”