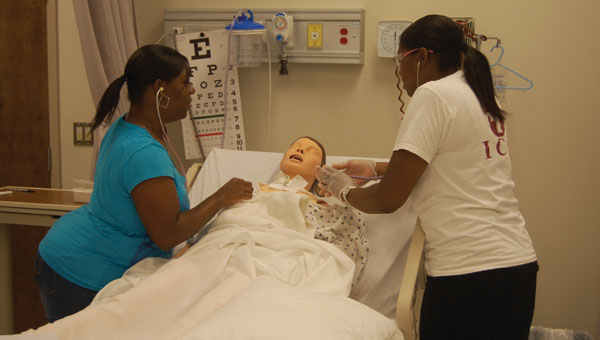 Nurses-in-training Alicia Campbell and Ebony Andrews listen for breath sounds before preparing a patient for a tracheotomy. (Advocate Staff/Jonathan Bryant)

The nursing department of the Lurleen B. Wallace Community College is redefining the meaning of “hands-on experience.”

Thanks to a generous grant acquired through the Health Resources and Services Administration (HRSA), students now have access to state-of-the-art manikins (not to be confused with mannequins) that can actually respond to their touch.

The $250,000 grant allowed for the purchase of two human-sized manikins, priced at about $100,000 each, as well as a baby version with fewer features.

Nursing division chair Nancy Smith said that the newest model, called the SimMan 3G, has “all of the bells and whistles” necessary to replicate nearly any scenario imaginable.

“Although there are a few other companies that manufacture similar devices, we chose the model because it went a long with what we already had,” Smith said.

One of the many improvements that the SimMan 3G boasts over its predecessors is the use of internal air compressors, which makes it much quieter than the models that were previously used in the department.

Other features include the ability to cry, perspire, simulate drainage and bleeding, and “listening” via microphones installed in the manikin’s ears.

You can even check its pulse and blood pressure.

“In every respect that’s pertinent, it is essentially a human being,” Smith said.

As the name suggests, SimMan 3G has wireless capabilities that add a great deal of flexibility to the learning experience.

And, despite the relative complexity of it all, the software is reasonably easy to use.

“The instructor can use a laptop to program a pre-designed scenario, either one that’s been purchased or previously written,” Smith said.

But the real draw, she said, was the ability to change things in real-time to accommodate introductory and upper-level courses alike.

“When using with a fundamentals class, we can just talk about something basic, like lung sounds,” Smith said. “Or, if we’re with a higher-level group like an RN class, we can change it on the fly to program a situation in which a patient’s blood sugar drops, and they have to assess the patient and make note of those changes.”

One of the prerequisites of the grant from the HRSA required being in a rural location with limited facilities, and Smith said that is precisely what makes the SimMan 3G such a useful training tool for this area in particular.

“It has been a wonderful asset to us because many students may not have access at the clinical site to patients with certain conditions,” Smith said. “There are things that, unless our students are constantly present in an emergency room, they’ll never be able to see.  Now, we can let them see those conditions.”