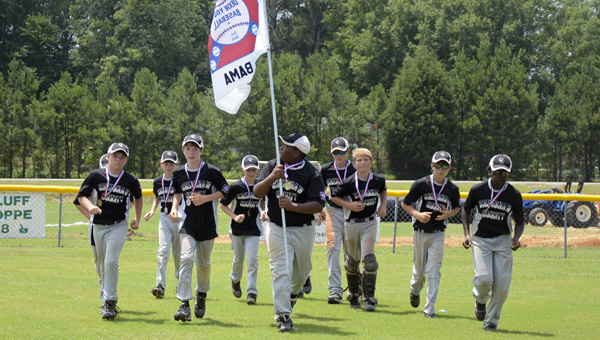 The Crenshaw County All-Stars tied for second in the state tournament in Hokes Bluff.

After a week of competition in Hokes Bluff, the Crenshaw County 11- and 12-year-old All-Stars’ run at a state championship ended with an 8-5 loss to Headland last Thursday.

The game was similar to many of the other games the team had played in the tournament — full of tension and undecided until the final at-bat.

“We left everything on the field in this game,” said coach Brian Blackmon.

Mann Person got things rolling for Crenshaw County early in the game.

Ben Archie reached base in the first inning, and two batters later, Person hit a two-run home run to give Crenshaw County a 2-0 lead.

Headland loaded the bases in the bottom of the inning, but a double play limited the damage to two runs, and the game remained tied at two.

Person again came up with a big bat for the team with a solo home run to right field in the top of the fourth inning.

Headland again responded and took a 4-3 lead in the bottom of the inning with a ground rule double to score a run and another run on a pitch that slipped to the backstop.

Crenshaw County was no stranger to close games, and needing at least one run in the top of the sixth to have a chance at winning the game.

Hunter Kendrick opened the inning with a single, and he ended up on second base following an error.

A single by Josh Hermeling put runners on first and third, and Kendrick raced home after a wild pitch to tie the game at 4-4.

Cason Brightwell laced a single down the third-base line to score Hermeling and give Crenshaw County a 5-4 lead.

The first two Headland batters grounded to second base for two easy outs, but Ryan Rose took the first pitch he saw and smashed it over the center-field fence to tie the game and send it to extra innings.

Crenshaw County struggled at the plate in the extra innings, and with two runners on base in the bottom of the eighth, Headland’s Chase Wilkerson grazed the top of the fence for a three-run, game-winning home run.

Despite the tough loss, coach Quinn Renfroe told the team that he was proud of their effort after the game.

He also told them that he was pleased with how they’d carried themselves all week.

Luverne Parks and Rec director Lee Simmons also congratulated the All-Stars on their runner-up finish, saying that it had been over a decade since a team from Crenshaw County made such a run in the state tournament.

Blackmon said that no one player stood out during the tournament.

Under Dixie Youth rules, each player must play at least three consecutive outs in the field, and the batting order is 1-12 instead of 1-9, which means that each player bats in order.

“It was a total team effort,” he said.

Renfroe also thanked the families of the players for being so dedicated.

The Crenshaw County All-Stars ended the tournament with a 3-2 record and a runner-up finish. 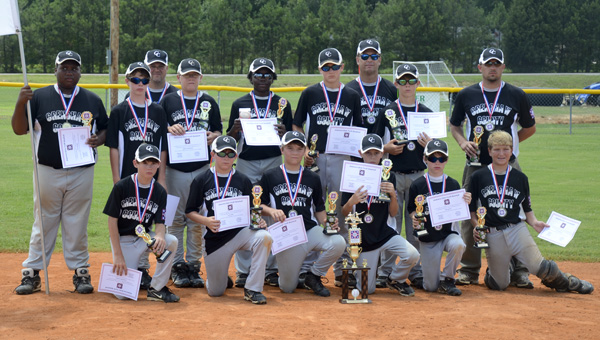