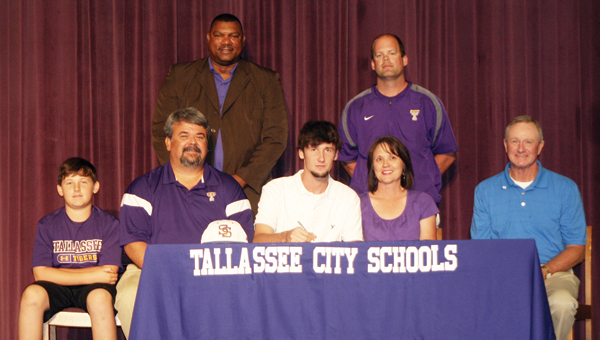 McNaughton is the son of former Greenville residents Keith and Leann McNaughton.

“You’ve worked hard, and considering what you’ve accomplished, you definitely deserve this,” Clayton told McNaughton. “You’re a good person both on and off the field, and I hope you don’t forget where you came from. You’re part of the Tallassee baseball family.”

“I’m sure you all know that Tallassee has a very good reputation for baseball,” Ledbetter said. “Snead is different from most junior colleges, and I’ve explained to Ryan that he has to make the grades. The reason you to college is to get a good education, and Snead is the number one school in the state as far as the number of students transferring to four-year schools. The bottom line is that you have to make your grades. We want our kids to come out of our school ready to go to a four-year school.”

The THS senior hurler was a two-year starter for the Tigers, although he garnered his first win as a sophomore against Opelika. His stats for 2012 included a 1.54 earned-run average, and 43 strikeouts.

McNaughton plans to pursue a career in agriculture, and he held numerous offices with the local FFA club. After completing his education at SSCC, he plans on transferring to a four-year college.