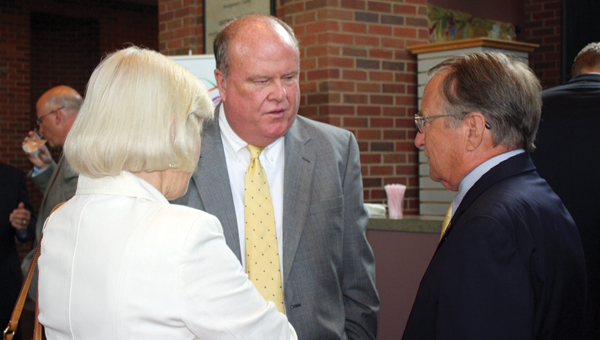 Special to The Advocate

For more than a decade, companies chose China to build their manufacturing plants to supply the world with their goods. At the time, China had a limitless supply of low-cost labor, a rapidly developing domestic market, low currency and significant government incentives to attract foreign investment.

Raymond Cheng, CEO of the Alabama China Partnership (ACP), says he created the ACP because he saw so much potential in Alabama.

“It is not the low tax structure or that it is a right to work state that draws Chinese companies to Alabama, it is the intangible things like the people and the communities” Cheng said.

Cheng is working with several rural communities like Monroeville, Thomasville and now Greenville.

“The people are so inviting and gracious, they open their arms to welcome the Chinese,” Cheng said.

With the help of Cheng, Thomasville recently landed Golden Dragon, which will create more than 500 jobs for the Wilcox County community. Monroeville recently hosted a symposium with more than 50 Chinese companies in attendance, all looking to move their facilities to the United States.

Cheng is now working with Greenville Mayor Dexter McClendon to put Greenville on the map for Chinese companies to see.

“The City of Greenville is looking forward to working with Mr. Cheng to develop a partnership that will benefit Greenville and surrounding areas,” McLendon said.

Cheng visited Greenville recently and met with McClendon and immediately knew that the Greenville community could be a great home for Chinese manufacturing.

McClendon is beginning to explore ways to create a Greenville China Partnership.

ACP works to bridge the gap between China and Alabama and has been working with government officials on both sides to bring about an economic partnership. Just this week, Hong Kong Commissioner of Economic and Trade Affairs Donald Tong visited Alabama and met with both state and community leaders, forming a relationship for future partnerships.  Tong is the highest-ranking government official in Hong Kong, and has not been to Alabama in 20 years.

McClendon met Tong and several members of the Hong Kong delegation at the event.

“I was very impressed with Commissioner Tong, his delegation and their presentation,” McLendon said. “It was wonderful to have Gov. Bentley show his support for this endeavor. This reiterates the importance of working together to motivate and strengthen our efforts in bringing commercial development to Greenville.”

Hong Kong has been an important trading partner with Alabama for many years and the relationship between the state and Hong Kong and has continued to grow. In 2011, Alabama exported $261 million in goods and services to Hong Kong, which is a 10 percent increase from 2010.

“We expect those numbers to continue to grow, and we are very appreciative of the relationship we have with Hong Kong,” Bentley said. “I look forward to building on the relationship, and we are glad to have the Hong Kong delegation visit Alabama to see all the opportunities that state has to offer.”

The Alabama China Partnership has offices in Monroeville, Montgomery and Birmingham and is looking to open an office in Greenville in the near future.

“We have available office space that has been offered to the Partnership for their use,” McLendon said. “Any opportunity of creating more jobs for the people in our community is welcomed.”