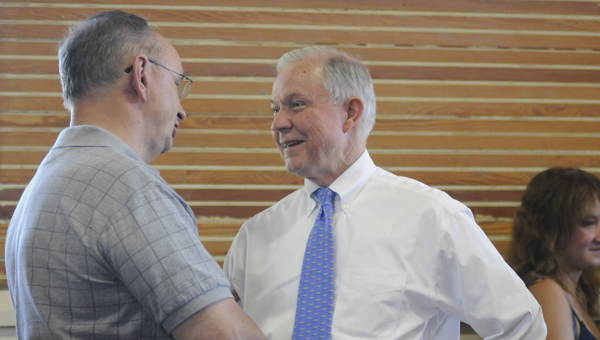 Standing on a train platform in Evergreen, Ala., a man shared with United State’s Sen. Jeff Sessions a bit of wisdom handed down to him from his father.

“He told me you can’t borrow your way out of debt,” Sessions said.

Sessions, the ranking Republican member on the Budget Committee, has seen that truth first hand during his tenure in Washington.

“We’re looking at a grim series of numbers,” Sessions told a group gathered at the Greenville Area Chamber of Commerce on Wednesday. “This nation cannot continue on the path we’re on. We’re on a path that is not sustainable, and we’re not doing enough to get off of it.”

According to Sessions, the nation is facing another $1.2 trillion deficit this year.

“We’re spending $3.7 trillion and only taking in $2.5 trillion,” he said. “Growing up in Monroe County and Wilcox County I learned a long time ago that you can’t spend money you don’t have. There’s no way we’re going to borrow our way out of this crisis.”

Sessions said that nearly 60 percent of the $3.7 trillion the federal government will spend this year will go toward Social Security, Medicaid, Medicare, food stamps and interest on the national debt.

“The election will have a big impact on how we handle what happens with that spending,” Sessions said. “I won’t go into that, but I will say that this is a great country, and we’re endangering it with debt. We have got to get off this path we’re on.”

He said he believes part of the solution is to create more American entities that are producing goods, a simplified tax structure that promotes economic growth and the elimination of unnecessary regulations that hamper business and economic development.

“We need to be doing things that create economic growth without debt,” he said. “We want people making money, hiring people, making a profit and paying taxes on that profit. We’re not doomed. I shouldn’t be too negative about it, but we do face a tough challenge and we’re going to have to make some changes to make sure that get to a point that we are financially stable again.”