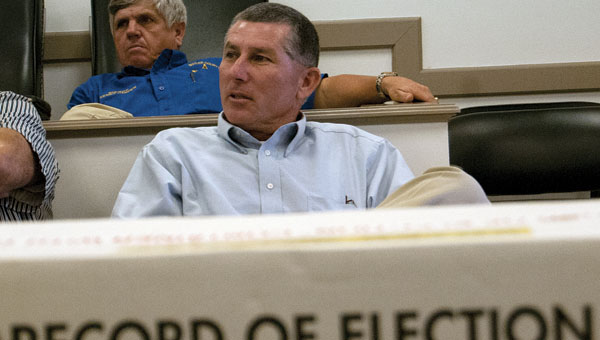 Darrell Sanders listens as the procedure for a recount is explained Thursday morning at the Butler County Courthouse Annex. (Advocate Staff/Andy Brown)

For the second time in less than a month he has won the race for Butler County Commission District 5.

A Thursday morning recount revealed that Sanders defeated incumbent Lynn Harold Watson by a count of 395 to 380.

“I’m overwhelmed,” Sanders said. “I’ve got a lot going on right now in my life with my wife being in the hospital. She’s been having contractions with our twins, and this has been a lot of stress for both of us. I’m glad that we can move on now.”

With no Republican opposition in November’s General Election, Sanders’ victory in the primary earns him a seat on the commission.

Watson petitioned for the recount based on the number of under votes tallied in the race on March 13.

“An under vote is basically where someone votes in one race on the ballot, but chooses not to vote in one of the other races,” Butler County Probate Judge Steve Norman said. “That would show up as an under vote.”

A ballot marked incorrectly can also register as an under vote when fed through the machine that tallies votes.

On Thursday each ballot from District 5 was fed back through the machine, and any ballots that registered an under vote in the District 5 race were examined by poll workers.

Twenty-eight under votes were recorded in the March 13 election. Of those 28, two ballots had votes cast for Sanders and one had a vote cast for Watson.

Watson, who paid $1,000 to the Butler County Democratic Party’s executive committee to cover the cost of the recount, said he owed it to the people who voted for him to have a recount done.

“It’s just something I had to do,” Watson said.