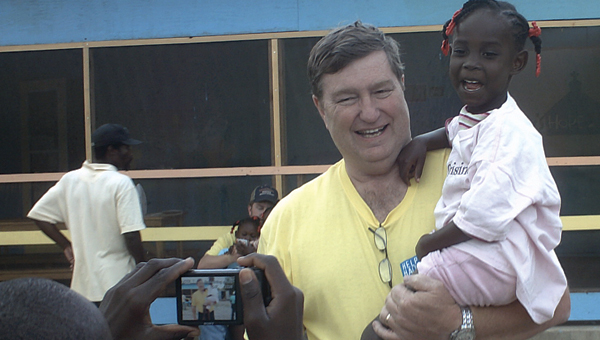 Tim Skipper poses for a photo while on a recent mission trip to Haiti. (Courtesy Photo)

Nathan Skipper never imagined that an earthquake some 1,300 miles away could have such a tremendous impact on his life and his faith.

That is until a magnitude 7 earthquake shook the very foundations of Haiti in the afternoon hours of Jan. 12, 2010.

“The earthquake brought Haiti to the forefront,” Nathan said. “Before that the Southern Baptist Convention and a lot of other mission organizations had not had their eye on Haiti. That all changed after the earthquake.”

Worldwide news coverage of the devastation in Haiti spurred a number of mission organizations to mobilize teams to assist with the recovery. Among those was the Alabama Baptist Convention, which organized teams to help with cleanup and building temporary shelters for Haitians who were left homeless following the earthquake. Nathan and his father Tim Skipper were among the Alabama Baptists that made the trek to Haiti.

“We were down there about six months after the earthquake hit, and it was just unbelievable,” Nathan said.

While in Haiti, the Skippers worked to build temporary shelters. At the same time, God was doing a work in their hearts.

“While we were down there we decided that we wanted to work with the churches in Haiti,” Tim said.

That desire led the Skippers to organize a second trip to Haiti in February of this year. This time their team built a church in Musac.

“Their church was just a tarp stretched across four polls,” Tim said. “It was just enough to block the sun. There also weren’t any seats at the church. The people would carry their own chairs if they wanted to have a place to sit.”

The Skippers helped build a more permanent structure for the church that included pews. The construction project took just more than two days, which freed the team up to venture into the city and share the gospel.

“The earthquake literally shook these people’s faith,” Tim said. “Their primary faith is voodoo and when the earthquake hit, it showed many of them that there is something much more powerful than what they have been worshiping. The Spirit of the Lord is moving in Haiti.”

Nathan, who serves as the pastor at Ebenezer East Baptist Church, saw that first hand while going door-to-door with a Haitian pastor.

“We visited with a woman who was probably 20 years old and her grandmother,” he said. “The grandmother was a strong believer and had been for a number of years, so we turned our attention to the young girl and asked if she knew where she would spend eternity if she died that night. She said she knew she would spend eternity in heaven. We asked her how, and she said that she had had a dream that a young American would come and tell her how she could be saved. That flustered the pastor a bit, and he looked at me and told me to take it. I gave a simple presentation of the gospel and she accepted Christ right then.”

The experience changed the young woman’s life, and Nathan’s as well.

“It strengthened my view of the sovereignty of God,” he said. “It helped me realize that God is working and moving all over the world and my only responsibility is to carry the message. God brings the increase.”

According to Tim, who pastors Bethel Baptist Church, the young lady was one of 80 Haitians that made a profession of faith during the team’s time in Haiti.

“These people are hungry for the gospel,” he said. “It was incredible to see how the Lord is moving in their lives. It was really an encouragement to all of us. People will say that we took a lot and gave a lot to Haiti. I can assure you that we received a whole lot more than we gave.”