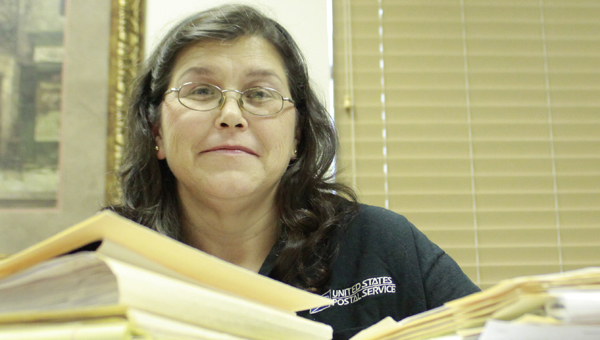 Brenda Durbin spent most of two days on the phone and completed a mountain of paperwork to file her taxes after learning that someone in Florida had stolen her identity. Photo Illustration/April Gregory

Brenda Durbin did what most every American tries to do this time of year, which was file her taxes.

However, she was stopped short when someone had already done it for her.

Thinking it was someone’s careless mistake of typing in his or her social security number wrong, Durbin called the IRS only to find someone had indeed stolen her identity.

“I went to file my taxes, and I got a message back from the IRS saying that they didn’t accept them because someone already filed them with that number,” Durbin said. “They had me call the IRS fraud line, and I found out later that someone had filed my taxes with my name and social security number from Florida.”

After spending two solid days on the telephone and completing a number of steps, Durbin is on the track to regaining her identity. However, she said she hopes no one has to experience what she has gone through.

“The process to get this taken care of is ridiculously long,” Durbin said. “I had to call the Internal Revenue Service fraud line, the Federal Trade Commission, the Credit Bureau and my bank.”

Durbin had to start checking all of her bank accounts on a daily basis and work with her bank to get a free credit report since she was a victim of fraud.

Along with making the phone calls, Durbin had to send in a change of address form to the IRS, file a police report and mail in her taxes with an identity theft form and copies of her ID, passport and driver’s license.

“It would appear that I have caught it early so I don’t have any damage that I know of, but that doesn’t mean that there isn’t stuff out there that is forthcoming,” Durbin said. “When I send my taxes in manually, they will flag the other person’s taxes and then they will do an investigation,” Durbin said. “They said it could take up to two years before I get my refund.”

Durbin has no idea how someone got her information, but Lt. Justin Lovvorn of the Greenville Police Department said it’s not hard for someone to get your social security number.

“The main thing is if you’re contacted through the Internet or phone, do not give any information,” Lovvorn said. “Anytime that a contact is initiated by someone calling you or emailing you or whatever it may be, it’s not a good idea to give out information.”

Lovvorn said whether it be over the phone, on the Internet or even face-to-face, it’s important to always get a copy of the return that the service has done for you to have proof through documentation.

“If there’s any suspicion or doubt in your mind giving out personal information to any business or person, contact our office,” Lovvorn said. “Ask for an investigation and tell us what you’re doing and we’ll give you some good advice on that particular situation.”

Durbin said this whole ordeal has left her feeling scared and vulnerable.

“I’ve always dotted every ‘I’ and crossed every ‘T’ because I don’t want (the IRS) coming after me,” Durbin said. “It’s not something you can take care of when you get off work. It’s overwhelming, and it makes you feel vulnerable. It makes you feel guarded about who you give anything to.”