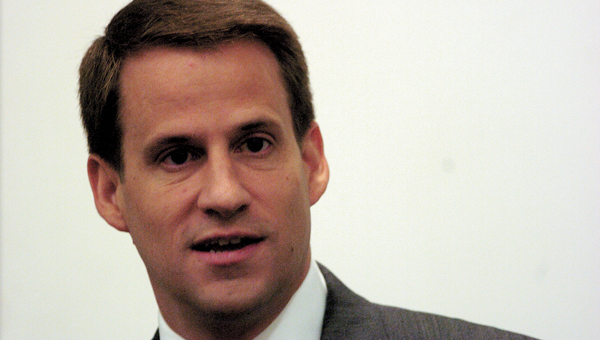 By Jaine Treadwell
The Troy Messenger

In his first year as an Alabama State Sen. Bryan Taylor, R-Prattville, has found that politics make strange bedfellows.

Taylor told members of the Troy Exchange Club Thursday that being a state senator is tougher than he had thought. He has found that not everyone agrees with his views on issues facing the state.

“I even have friends that have legitimate differences on views,” he said. “You have to be willing to try to see issues from their perspectives and hope they’ll try to see things from yours. You have to learn to work together and to share ideas if you are going to be productive.”

Taylor said the recent Legislative session was the most productive in decades.

He said the Legislature got things done as promised and sealed with the “Republican Handshake.”

“Everything on our list of campaign promises, we did, except the pay raise issue,” he said. “It is my belief the pay raise is wrong. It is unconstitutional. You should never be able to vote yourself a pay raise.”

Taylor has not accepted the pay raise and is compensated for his service at the 1991 rate of pay.

Taylor said he will sponsor a bill to repeal the pay raise as unconstitutional and excessive. However, he said the pay raise issue is complicated.

“I will support base pay with reimbursement for expenses,” he said. “And, that base pay should not exceed the median income for the state. But the devil is in the detail.”

Taylor said that jobs growth should top the Legislative agenda and include an aggressive tax incentive.

“We must reduce the regulatory burden for small businesses,” he said. “We have got to help businesses stay in business.”

Taylor highlighted four reasons that Alabama is primed for industry.

“Alabama has low energy costs,” he said. “We are a ‘right to work state.’ We have one of the best workforce training programs in the country and, then, there is the Alabama work ethic. We are hardworking people.”

Taylor said with all of that working for Alabama and, if the state keeps its economic incentives in place, Alabama will continue to attract industries.

Taylor voted for the state’s illegal immigration law, which he said is “tough.”

“I support the employment of immigrants who come in through the front door,” he said. “I voted for the bill with the belief that we can come back and tweak the law and get the things out that needed to come out. The Legislature seldom passes new laws. What we do is amend laws and that’s what we must do with the illegal immigration law.”

On the Ethics Reform Law, Taylor said that purpose of the law is to make it a crime for lobbyists to lavish gifts on public employees, not to keep school children from giving their teachers Christmas gifts.

Taylor said he will support the establishment of charter schools that will offer opportunities for students trapped in failing schools.