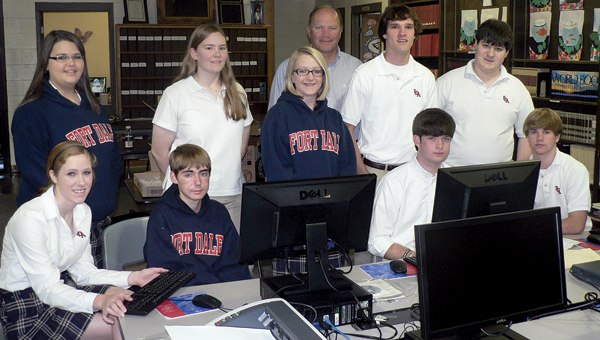 Mason Stinson has always been interested in how things work.

So, when the chance came to take a computer apart piece by piece, the Fort Dale Academy senior jumped at the opportunity.

“I like to know how everything works,” Stinson said. “I like to see how things are connected, and I’ve always been pretty interested in computers and how they work. All the stuff that’s possible to do with a computer now is just amazing.”

Stinson is one of 10 students that make up Fort Dale’s technology team. The students arrive at school at 7:30 a.m. on Tuesdays and Thursdays to receive training in troubleshooting and computer repair, while helping maintain the school’s 70 plus computers.

Dennis Scofield, a member of the school’s technology committee, provides the training for the students.

“With more than 70 computers on campus, there was always someone coming to Mrs. (Pat) Skipper with a computer issue, and it was really too much to handle,” Scofield said. “We felt like the best way to handle it would be to teach these youth basic computer skills that they can use to help resolve the different issues that might pop up.”

Senior Matt Langford was eager to help out.

“I like solving problems,” he said. “I like when someone calls me and tells me their computer blew up, and I go fix it for them. It’s rewarding.”

Senior LeeAnne Whigham said finding and fixing the various problems was challenging at first, but with practice it has become much easier.

“It was so much information at first, but it comes pretty fast,” she said. “After a while, I would be working on something and realize that I could do it myself and didn’t need to ask for help. … It’s pretty cool to know that if a computer messes up I can fix it.”

Along with keeping the school’s computers up and running, the tech team has also installed a number a new computers in the computer lab and the library.

“The students have really accepted and been enthusiastic about being a part of this team,” Scofield said. “They’ve done a great job and have really provided a valuable service to the school.”