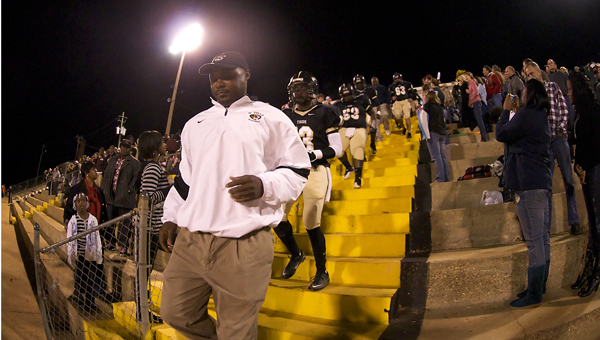 Greenville High School head coach Earnest Hill and the Tigers will face Vigor in the second round of the AHSAA playoffs. Kickoff is set for 7 p.m. Friday at Tiger Stadium. (Advocate Staff/Ashley Vansant)

It became official on Friday.

“We’ve been looking at Vigor since they lost to St. Paul’s (Episcopal High School on Sept. 30) and it started looking like they were going to end up as a No. 2 (seed),” Greenville head coach Earnest Hill said. “We had a pretty good feeling that we’d see them in the second round.”

Both teams advanced despite not turning in their best performances in the first round. Greenville (11-0) thumped Tallassee, but struggled at times on both offense and defense due to what Hill called “a lack of focus.” Vigor, which has won five games in a row, squeaked out a 6-0 win against McAdory.

“We had a tough time coming off the Blount win, and our defense had to step up for our offense tonight,” Vigor coach Kerry Stevenson told the Birmingham News following his team’s win. “Our defensive line has been our strength all season, and they bailed us out.”

That defense will be one of the best the Tigers have faced this season, according to Hill. Vigor’s defense has held its opponents to just 6.5 points per game this season, and on Friday limited McAdory to just 66 yards of total offense in the second half, while tallying nine sacks.

“They are loaded,” Hill said. “Their offense is getting better each game and they have decent special teams, but their defense is the best we’ve seen.”

Hill said the Tigers, who scored a season-high 57 points against Tallassee, will not change what they do on offense for the Wolves. Instead, execution will be the key.

“We’re going to do what we do,” the first-year head coach said. “As long as we execute I think we’ll be fine. We just have to stay focused and make sure we go out and play good football.”

Kickoff for Friday’s contest is scheduled for 7 p.m. at Tiger Stadium.