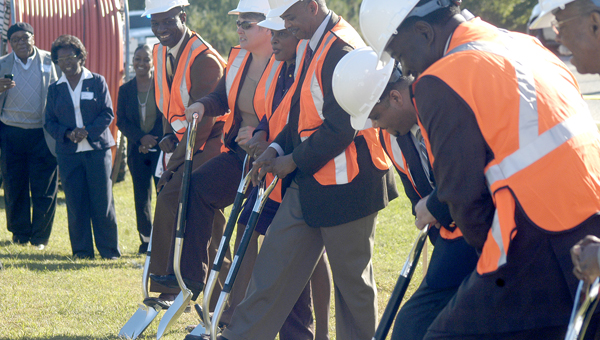 The event included a groundbreaking ceremony held by grant recipient Trillion Communications. However, A2D, the grant sub recipient, is responsible for the design, engineering, construction and private network operations.

Ralph E. Brown, ceo of Trillion Communications, said Tuesday’s beginning was “historical,” heading to Selma and Montgomery. “Get out of the way because we are piling some dirt over the next few months,” he said.

Brown said the construction in Lowndes County was starting on Highway 21 in Hayneville with 140 miles of fiber optic cable going north toward Highway 80, past Selma and east into Montgomery.

He said the total cost of Phase One is $7 million.

“We will establish a community technology and customer care center within the Hayneville Plaza. When we finish Phase One, we will have connected a total of 500 within the town of Hayneville, 17 anchor institutions within Lowndes County.”

A $59 million grant from the National Telecommunications Information Administration and $27 million from private investors will fund the project.

According to Trillion, by the end of 2013, the broadband network will connect approximately 15,000 homes and 800 institutions in Butler, Crenshaw, Conecuh, Dallas, Escambia, Lowndes, Macon and Wilcox counties.

“This is so big for Hayneville, it is hard to put into words,” said Bell. “We foresee it bringing jobs and spending money. The more people we bring, the more businesses that come along with this project… I believe it is going to have a great economic development impact on our county and on our city.”

Sparks said the impact of the project has to be a positive for this particular reason “not only competing for jobs, the education opportunities that you’re going to have, the health care opportunities, the law enforcement opportunities, the government connectivity that you are gong to have. This is a big deal.”

He said, “It is connecting rural Alabama to the global world.”