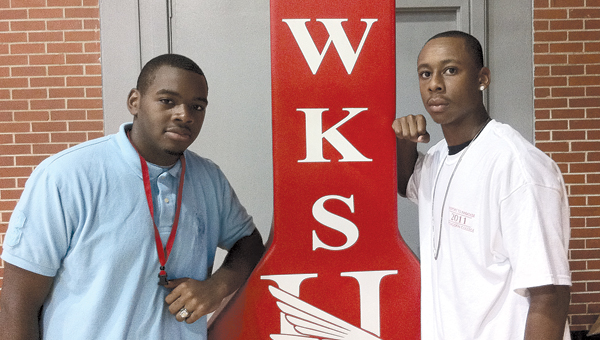 Lee and Page played one season of varsity basketball together at the Butler County School. Both recently committed to play basketball for the Hawks, which compete at the NCAA Division III level.

“I think this is a tremendous boost for Huntingdon’s program,” Georgiana head basketball coach Kirk Norris said. “Not only are they getting two quality basketball players, but they are getting two great kids that will do whatever it takes to be successful on the court and in the classroom.”

It was the happenings inside the classroom that convinced Lee, who spent two seasons at LBW Community College in Andalusia, to attend Huntingdon.

“It’s a school with very good academics,” he said. “Huntingdon has some of the best academics around and that’s really what excited me about going there. The coaches were about academics first and then basketball, and that’s how I’ve always been. It just felt like the right fit.”

The proximity of the Montgomery school to Georgiana and the relationship with the Hawks’ coaches also made Huntingdon the right fit for Page.

“It’s close to home, and I really liked the atmosphere,” Page said. “The coaches were really welcoming and it seemed like a good fit for me.”

Norris believes his two former standouts will have the opportunity to compete for playing time immediately.

“Jarrod has two years of college basketball under his belt, so I feel like he can step in and play right away,” he said. “Adrian will have to make the adjustment to the college game, which can be difficult, but he’s a hard worker and he’ll do what it takes to get himself ready to play. I think both of these guys can go in and help Huntingdon out this season.”

While at Georgiana, Lee averaged 12.1 points per game, 7.2 assists per game and 3.9 steals per game during his four-year career as the Panthers’ point guard. He also led the Panthers to a 22-9 record and No. 4 ranking in the state as a senior and was named to three all-tournament teams.

“He’s one of the best players I have ever coached,” Norris said. “Jarrod makes everyone else better. He’s not a big scorer, but he does a tremendous job of running the team. Having him out on the court is like having another coach on the floor.”

Page averaged 12.3 points per game, 10.5 rebounds per game and 2.5 blocked shots per game during his two years on Georgiana’s varsity squad. He was also a five-time all-tournament team selection.

“Adrian is a self-made player,” Norris said. “No one works harder at getting better than he does. He’s turned himself into a great rebounder and he has good ball handling skills and a decent touch on his shot. He’s a very versatile player.”

The former Panthers will kick off their Huntingdon careers Nov. 15 when the Hawks play host to Birmingham-Southern at the Catherine Dixon Roland Student Center.