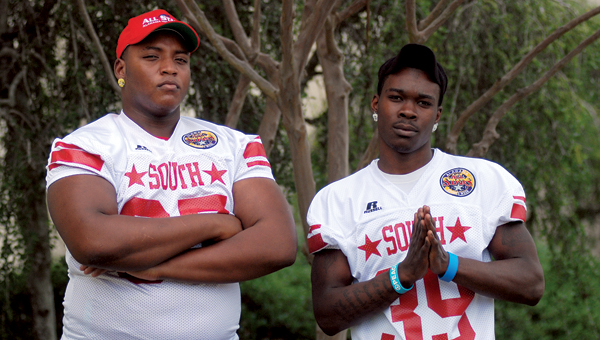 Wide receiver Michael Watts and right tackle Shaq McMeans both said the level of  competition was change of pace from high school.

“Everybody was good,” McMeans said.

The game is unique from most others in that players from all across the state are thrown together and have only a short time to practice together.

“After the first day, everybody clicked up,” Watts said. “We all connected before we left and added each other on Facebook.”

“We will still see each other again,” McMeans said.

The North held the lead throughout the entire game, up 19-8 at half and eventually bolstering its lead to 26-8 in the third. With only minutes remaining in the game, North made it a two score game, 33-23.

But the South refused to give up. A 13-yard pass found the hands of Watts with only 54 seconds left in the game to bring the score 33-30. With no other choice left and time running out, the South went fro broke kicking an onside kick and recovered it on the North 48-yard line.

The South managed to move the length of the field and score another touchdown in four plays, leaving only 25 seconds on the clock after they had pulled the score to 37-33.

Watts picked up two touchdowns for the day, and McMeans tallied 7 tackles.

“It was an exciting game,” McMeans said.

The two now prepare for the start of college practices, which the two say they have heard is “excruciating.” Tuskegee will begin practice Aug. 10.