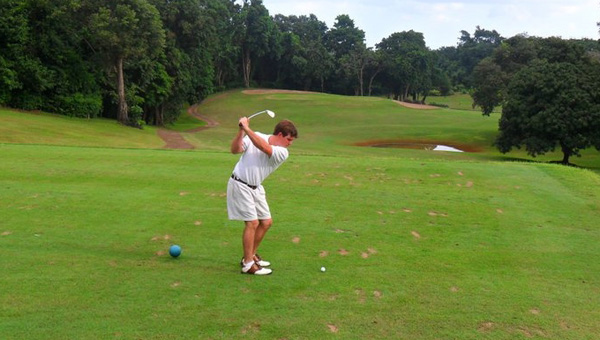 Greenville native Ty Langston recorded a hole in one Saturday on the Greenville Country Club's par-3 No. 4. (Submitted Photo)

Many golfers spend their whole lives chasing an elusive hole in one.

In just six years, Ty Langston has carded two aces. The Camellia City native’s most recent hole in one came on Saturday on the Greenville Country Club’s par-3 No. 4.

“It was on the back nine, and the hole playing about 176 yards from the orange tees. I hit a six iron and it just went in,” Langston said.

Because the pin was positioned at the back of the green, Langston didn’t actually see the shot drop in the hole.

“There were a couple of balls that went over the green, and I assumed one of those was mine,” he said. “I walked over and checked them and neither were mine, so I checked the hole and it was in there. I freaked out a little.”

Sports Illustrated, which also did its own study, lists the odds at 1 in 45,000 for an amateur golfer.

Langston, who typically plays golf twice a week, has obviously defied the odds.

His first hole in one came on the fourth hole of Cambrian Ridge’s Loblolly Course.

“I think I was more surprised by this last one,” Langston said. “The odds of hitting a second hole in one aren’t very high.”