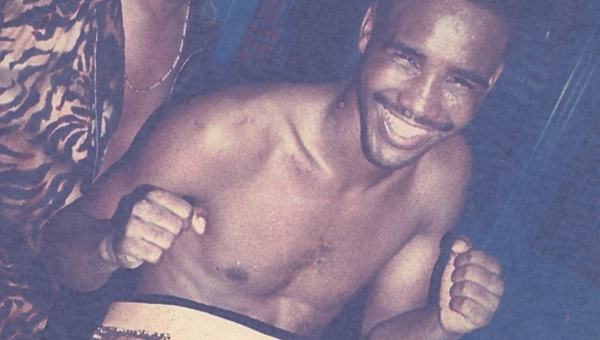 Keely Thompson poses with his Lightweight World Championship belt in this undated photo. Thompson has been promoting a proposed boxing event at the Butler County Fairgrounds.

Greenville Police Chief Lonzo Ingram advised the public to be “leery” of a former world lightweight champion trying to organize a professional boxing match in Greenville.

Ingram and Mayor Dexter McLendon addressed their concerns about the former boxer’s efforts at a press conference Tuesday at city hall.

“Keely Thompson, who was a professional boxer back the nineties, has come to Greenville with the thought of having a boxing event at the fairgrounds,” Ingram said. “We want everyone to know that the mayor of Greenville, and the Greenville administration, do not support this endeavor and are not involved in any way.”

Ingram and McLendon said they were troubled after researching Thompson on the internet.

“If you Google Thompson’s name, the first thing that comes up is an article from the Washington Post,” Ingram said.

That Post article details the November arrest of Thompson, 45, by agents from the FBI and the Washington D.C. Inspector General’s office.

Thompson was charged in a criminal complaint with wire fraud, according to a press release from the U.S. Department of Justice. As Executive Director of a Washington D.C. boxing and youth center, he is accused of taking approximately $506,000 in public funding and using the money for gambling and other personal expenses.

The USDOJ release cites an affidavit describing Keely’s District Boxing and Youth Center as a non-profit organization that received more than $1.4 million in government funding since 2004. The money was intended to provide programs for at-risk children ages 8-18, but instead some was withdrawn from the organization’s credit card as cash, spent on cruises and at an Atlantic City casino, according to the release.

Thompson’s case has not yet come before a grand jury.

He denies that the charges have any weight.

“All charges will be dismissed. I have done the right things in my life,” Thompson said. “I am going to stand strong and keep my faith in God.”

Ingram informed Thompson by telephone Monday that the city will not support the boxing match.

Thompson said he appreciated the honesty from city officials, but still plans on bringing the event to Greenville on May 14. The event will feature local boxer, Antonio Fanning, Thompson said.

“I’m coming to Greenville for a pro boxing match, not to open a youth center,” Thompson said. “This city needs a little spark, I hoped to bring a little economic activity to the area.”

While city officials can’t prevent Thompson from hosting the event, the boxer has expressed interest in selling alcohol at the event, which would require approval from the city council and mayor.