Bryan sworn in for second term 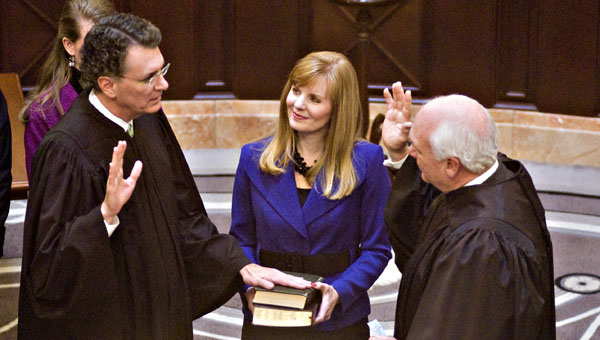 Surrounded by family and with his left hand on a Bible held by his wife Pamela, Brantley native Tommy Bryan received the oath of office from Probate Judge Jim Perdue.

Three of Crenshaw County’s own took center stage during the inauguration festivities earlier this week.

On Monday, Judge Tommy Bryan took the oath of office for his second term on the Court of Civil Appeals.

The ceremony took place in the Alabama Supreme Court, and his oath of office was administered by Crenshaw County Probate Judge Jim Perdue, who is also the president of the state’s probate judges’ association.

“I’m very fortunate to have the honor,” Perdue said.

“I promised six years ago that I would treat others as I would be treated,” Bryan said. “I’ve attempted to be true to that. I take this oath very seriously.”

He had had held that position since 2005, and new governor Robert Bentley re-appointed him to the post.