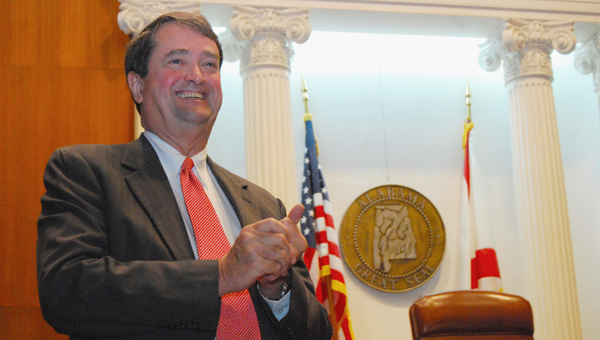 Judge Ed McFerrin, who presided over the 2nd Judicial Circuit for 17 years, reacts to a gathering of friends in the courtroom of the Butler County Courthouse on Friday. McFerrin retired in December. (Austin Nelson, Photo)

Judge Ed McFerrin thought he was simply there to swear in his successor. However, his friends in the 2nd Judicial Circuit of Alabama had other ideas.

On Friday morning, McFerrin, who retired as circuit judge for Butler, Crenshaw and Lowndes counties at the end of 2010, was honored with a plaque for his 17-plus years of service on the bench as friends, family and co-workers from across the circuit looked on.

Greenville lawyer Calvin Poole, who presided over the event, held in the courtroom of the Butler County Courthouse, said he’d been asked for “no ceremony or a bunch of speeches.”

“But it is appropriate to pay some small tribute to those who play a role in government and the application of laws . . . what Judge McFerrin did on that bench was not just important to the county, but to our republic,” Poole said.

McFerrin, a Greenville native and graduate of the University of Alabama School of Law, is a decorated Vietnam veteran who returned to his hometown to practice his profession.

Appointed by Governor Guy Hunt to the circuit judgeship in 1992, he was elected for three additional terms in 1995, 2001 and 2007.  During McFerrin’s tenure, he served on and chaired numerous committees, and most recently served as president of the Alabama Circuit Judges Association. He was also an active member of the Greenville Rotary Club for 37 years.

Chief Justice of the Alabama Supreme Court Sue Bell Cobb arrived at the courtroom in time to laud McFerrin for his contributions to the judicial system in the state.

“I know he is truly here under false pretenses today. He doesn’t need or want the praise due to him for his faithful service . . . but he deserves it. Judge McFerrin is the best kind of judge, one who rules with both his heart and his head,” Cobb said.

“He is someone with knowledge and intelligence but also an abiding concern for people.”

District Judge MacDonald Russell describes McFerrin as a judge who is “smart and diligent in applying the law.”

“He has been very fair, just an excellent jurist,” Russell said. “He has certainly had a good career and he will be missed.”

As he expected, McFerrin also got to preside over the swearing-in of Terri Bozeman-Lovell as the new circuit judge. Lovell, who has served as district judge in Lowndes County for 13 years, spoke highly of her experiences working with her predecessor.

“I have really big shoes to fill . . . Judge McFerrin was a great mentor who believed on me from the first day,” Lovell said.

“He gave me the opportunity to do things to take me out of my comfort zone, and now he is helping me with my transition. I am excited my predecessors here-Judge McFerrin, Judge Gamble and Judge Thagard-have done such a wonderful job.”

Circuit Clerk Allen Stephenson said McFerrin could take pride in the job he had done while serving on the bench.

“As the chief justice said, he doesn’t want the praise, but he deserves it,” Stephenson said.

Although he has left the bench as circuit judge, McFerrin will continue to preside over certain cases around the state as an active retired jurist.