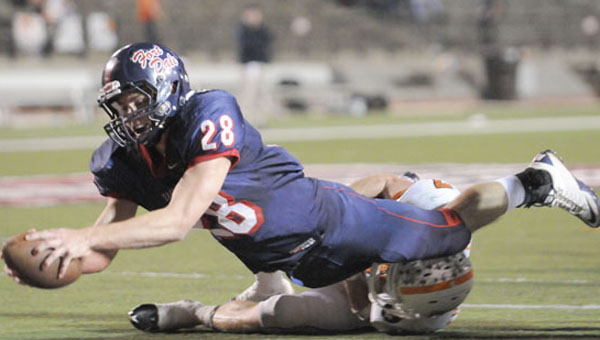 Fort Dale running back Manny Norrell dives for the goaline in the second half. (Advocate Staff, Ashley Vansant)

The Eagles notched the score 14-14 at halftime as sophomore Ryan Salter pulled in a six-yard touchdown catch from Hunter Armstrong with no time left on the clock.

The second half was all Eagles. Fort Dale’s Perry Singleton had a two-yard touchdown run to put the Eagles up for good 21-14. Stephen Till’s interception return for a touchdown capped off Fort Dale’s big win.

Fort Dale rolled up 332 yards rushing against the Vols’ defense and held Monroe Academy and speedster running back Sam Vermilyea to 169 yards on the ground. Vermilyea had the bulk of those with 152 yards and two touchdowns. FDA had 426 yards total offense to Monroe’s 286.

Armstrong led FDA on the ground with 172 yards on 22 carries. Manny Norrell had 123 yards.