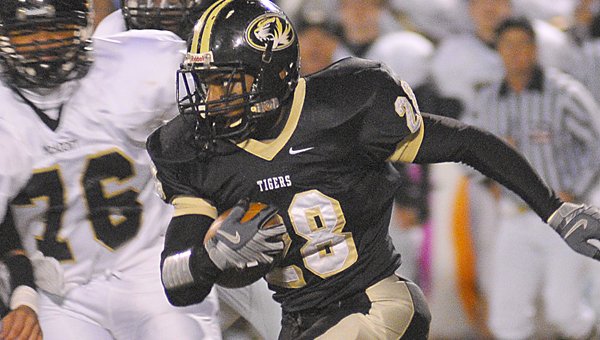 Senior Patrick Bedgood had a 51-yard run in the first quarter against McAdory on Friday night. (Advocate Staff, Kevin Pearcey)

Three turnovers and a three touchdown halftime deficit against visiting tenth-ranked McAdory was too much for Greenville to overcome on Friday night in the first round of the playoffs. The Tigers were knocked from postseason play, 28-12.

“We made mistakes in the first half,” said GHS head coach Ben Blackmon. “That’s what killed us and you can’t do that against a good team like McAdory. But I was proud of the way our kids came out in the second and fought hard.”

The Tigers scored 12 straight points after exiting the locker room. Quarterback Kent Riley turned a rare McAdory fumble into points, scampering for a 13-yard touchdown. Then, Riley connected with senior receiver Michael Watts for a nine-yard score on a fourth and three yards to go midway through third quarter.

“I just told the kids to come out and play hard in the second half…don’t look at the scoreboard and let the chips fall where they may,” said Blackmon.

But McAdory’s offense, which had the Tigers’ defense baffled in the first half, re-established itself. Running back Emmett Terry, stifled earlier in the third, started finding the kind of running room he’d had in the first two quarters. Terry and quarterback Brandon Bender chewing up yardage and clock. When Bender scored on a three-yard touchdown, the Tigers had just eight minutes to work with.

Which seemed like it might be enough. Riley quickly moved the Tigers’ down the field, utilizing his legs, and Greenville had the ball on McAdory’s nine-yard line. A bad snap on third down, though, sailed over Riley’s head and forced him to cover the ball at the 20-yard line. On fourth down, the sophomore’s pass intended for Harper Vincent fell incomplete.

McAdory ran out the clock, its final possession ending on the Tigers’ side of the field.

The three first half turnovers stung the Tigers, but Greenville had a golden opportunity on its first possession of the game to make a statement. Patrick Bedgood took a handoff from Riley and carried it 51 yards to the McAdory six-yard line. But a penalty pushed Greenville backwards and Riley’s fourth down pass from the two-yard line was incomplete.

“That was a momentum killer right there,” said Blackmon.

Still, the Tigers defense did it job, forcing McAdory to punt from the five-yard line.

Return man Tijuan Rudolph tried the field the punt and fumbled. Bender found Geoffry Morrow behind the Greenville defense for a 33-yard touchdown. Greenville went three and out and Bender took a quarterback draw up the middle of the Tigers’ defense – almost fumbling the ball, but pinning it to his back and controlling it – and rushing for a 34 yard gain. A few plays later he found Darryl Jones for a six-yard scoring pass.

On the Tigers’ ensuring offensive possession, Riley was picked off on third and nine at the McAdory 45-yard line. Terry then went 33 yards on a jet sweep for the score following a fourth down conversion by the Yellowjackets.

The third turnover came right after that. Jamal Hamilton attempted to field the kickoff and fumbled at the 36-yard line. McAdory recovered, but the Tigers’ defense stiffened forcing a punt.

It didn’t matter. The damage, said Blackmon, had been done.

The Tigers finish the season 7-4.