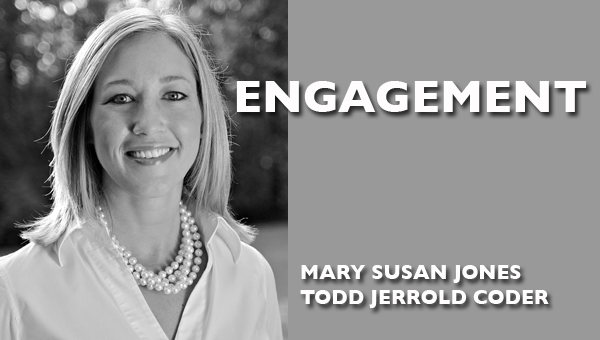 The future bride is the granddaughter of Mrs. Henry Grady Norrell, Sr. and the late Mr. Norrell and Mr. and Mrs. Charlie Wayne Jones.

Miss Jones received a bachelor’s degree in Finance from the University of Mississippi, where she was a member of the Delta Delta Delta Sorority and the Associated Student Body. She is employed as an internal consultant for Regions Financial Corporation and is a member of the Junior League of Birmingham.

Mr. Coder received a bachelor’s degree from The University of Alabama in Political Science where he was a member of the Pi Kappa Phi fraternity.  He is employed as the Live Music Talent Buyer at WorkPlay Entertainment Complex in Birmingham, AL. Additionally, he is a contributing writer for B Metro magazine, a member of the UAB Leadership Class 2010, and a Junior Board Member at The Club.